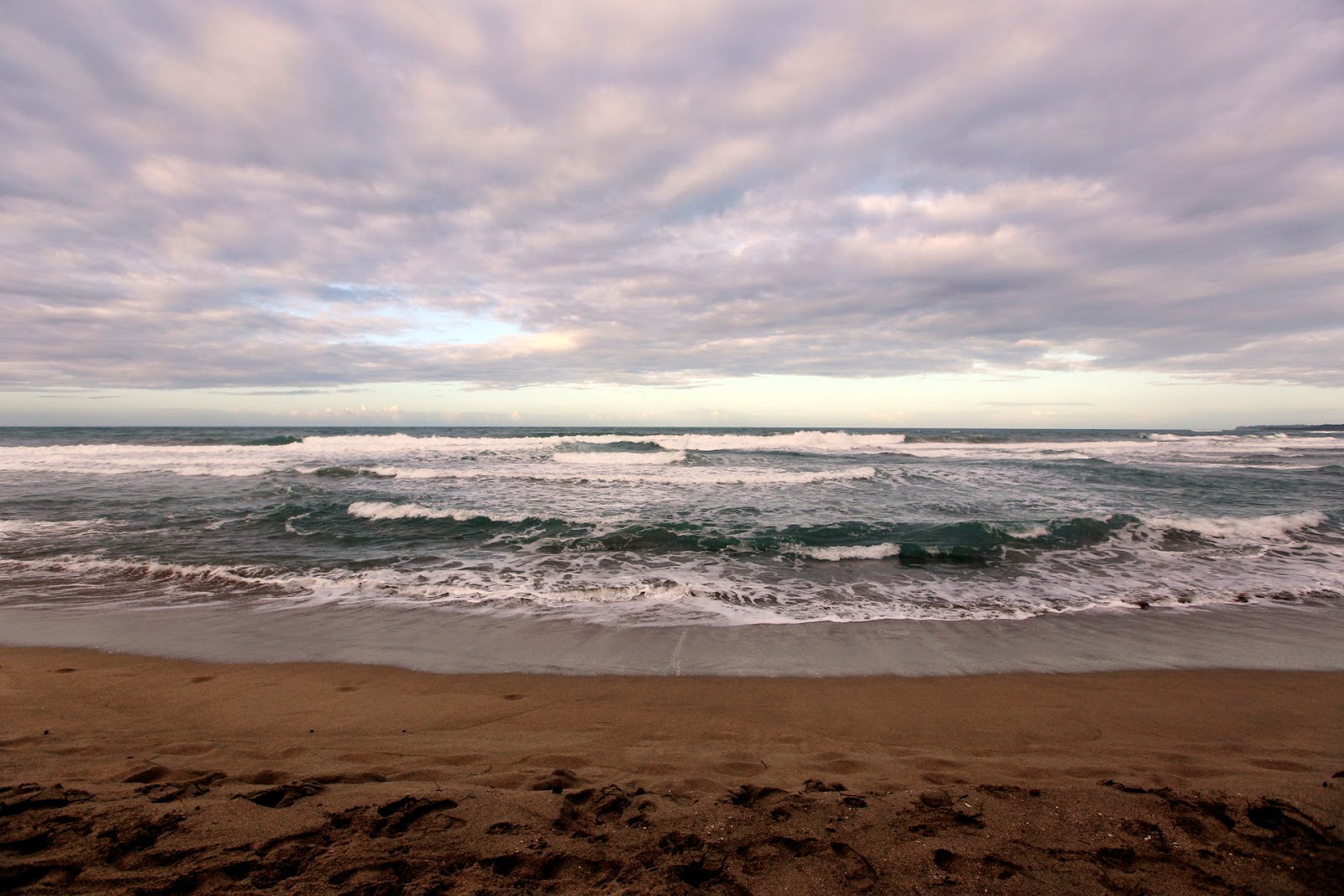 Hopefully the title explains this well enough. I just wrote as I went, so take it as it is.


Pure backpackers boarded my second plane. They all had overwhelming duffles and cumbersome knapsacks, thermoses hanging off of dusty Jansports and those heavy duty athletic sandals good for hiking and climbing over rocks. They were tan, not the beach kind of tan, red and leathery, but a healthy brown (for white) like they spent most of their time outside in parks and on nature trails. I would imagine that they smelled like earth. They had laid back buns and pony tails and white corn rows and boho skirts and billowing harem pants and guitars to strum around bonfires and those colorful hipster string necklaces you grab from a small country's local markets. All smiling and chattering down the length of the aircraft. "I like your hair," one said to me as she slowly passed my coarse twists.

These flights have been superb lately. Super smooth with very little jitters on my end. Is it just that these are better pilots? Windless days? Maturity? Or just that I've been so booked with travel that my psyche has no chance but to calm down and boss up. And the ambience of all this solo travel has been nice too. For a long time, I couldn't even fathom tackling an airport all by lonesome. No one's shoulder to bury my eyes into during takeoff and turbulence. No one to occupy my attention at the gates pre zone 4 boarding. Hell, no one to be accountable for or to be accountable for me at the destination. It's cool though. Alarmingly, I don't feel nervous right now. Mexico was a good prep and the strangers I've been interacting with make me feel at ease. The sweet Asian girl sitting next to me—I could pick up her positive energy from the get go—just randomly offered me a stick of Juicy Fruit. We haven't actually spoken the entire flight and I literally hate Juicy Fruit, but I accepted and now I'm chewing this insanely large wad of gum, waiting for the flavor to fade out. I can't help it, I'm a sucker for random acts of kindness. I didn't want to kill the moment.

I am seriously winging it at this point. I'm on hour two of a five-hour local bus ride to Puerto Viejo de Talamanca, winding through lush green foliage on foggy mountain tops. My ears keep popping and my skin feels sticky. I'm so tired and hot that I can barely keep my eyes open to take it all in. It's suddenly raining down outside and my umbrella is in my suitcase. Oh, and my suitcase is somewhere lost in the San Jose airport by now. It never made it to the baggage claim area and I had to leave without it to catch this bus. There's only one every two or so hours. 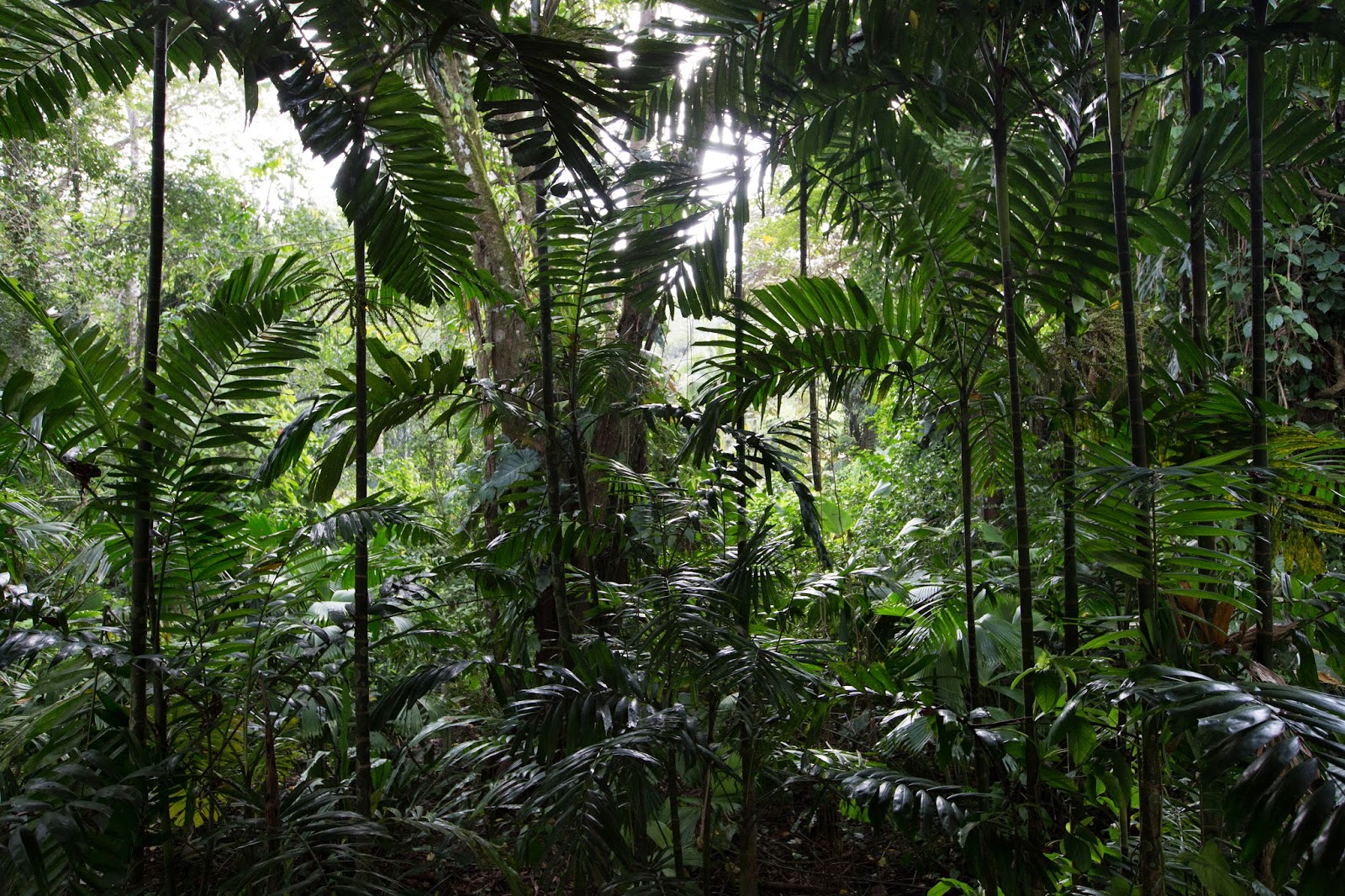 I wake up a little bit later, and the greens around me are thick. I'm driving into the jungle basically. This is going to be an interesting two weeks of solitude. Outside doesn't even look like it even rained. We just stopped at a rest stop in Limon. Hopefully this empanadas will hold me over until I get settled in. Oh yea, and 'til I get my luggage. (Post empanada: it was quite delicious). Back on the hot, damp bus we all pile on, onward to Puerto Viejo.

In an earlier blog post, I remember desiring a life were I didn't feel so safe and unchallenged. Wanting a little more discomfort. Welp, I certainly got it. My current predicament is certainly uncomfortable. It's 7:20 am the day after arriving in San Jose then bussing it five hours to Puerto Viejo. My first hotel photo shoot is scheduled for 9 a.m. at another hotel somewhere in the area. I have still not received my bags. Meaning, on the smaller side of things, I have no change of clothes. I managed to sorta shower and have mint gum and travel wipes, but my obvious necessities (toothbrush, toothpaste, deodorant, perfume) are in that suitcase. Also in the rass suitcase... my flash and the attachment I need to do panorama shoots at said 9 a.m. hotel. My current hotel told me yesterday that at 6:30 a.m. they'd send my bags to this hotel (which I'm checking out of before said 9 a.m. shoot). I went to the front desk at 6 a.m. wistfully to see if it was there, only to find the "lobby" shack shuttered, lights off with a man outside of it charging his phone. I have no idea if he worked there or not, but he asked what I needed. "When do they open?" A ocho. Freaking great. And there's no phone in the room to call the airport myself. The airport that's five hours away, that is. I'm going to go down and indulge in their breakfast, which very well may be the only silver lining here, and pray for the best.

Although the breakfast was good, prayer didn't work here. My stuff isn't here and the front desk guy said they may deliver it tonight or tomorrow morning, the same thing they said last night. I'm pretty sure I'm going to smell awful by then. 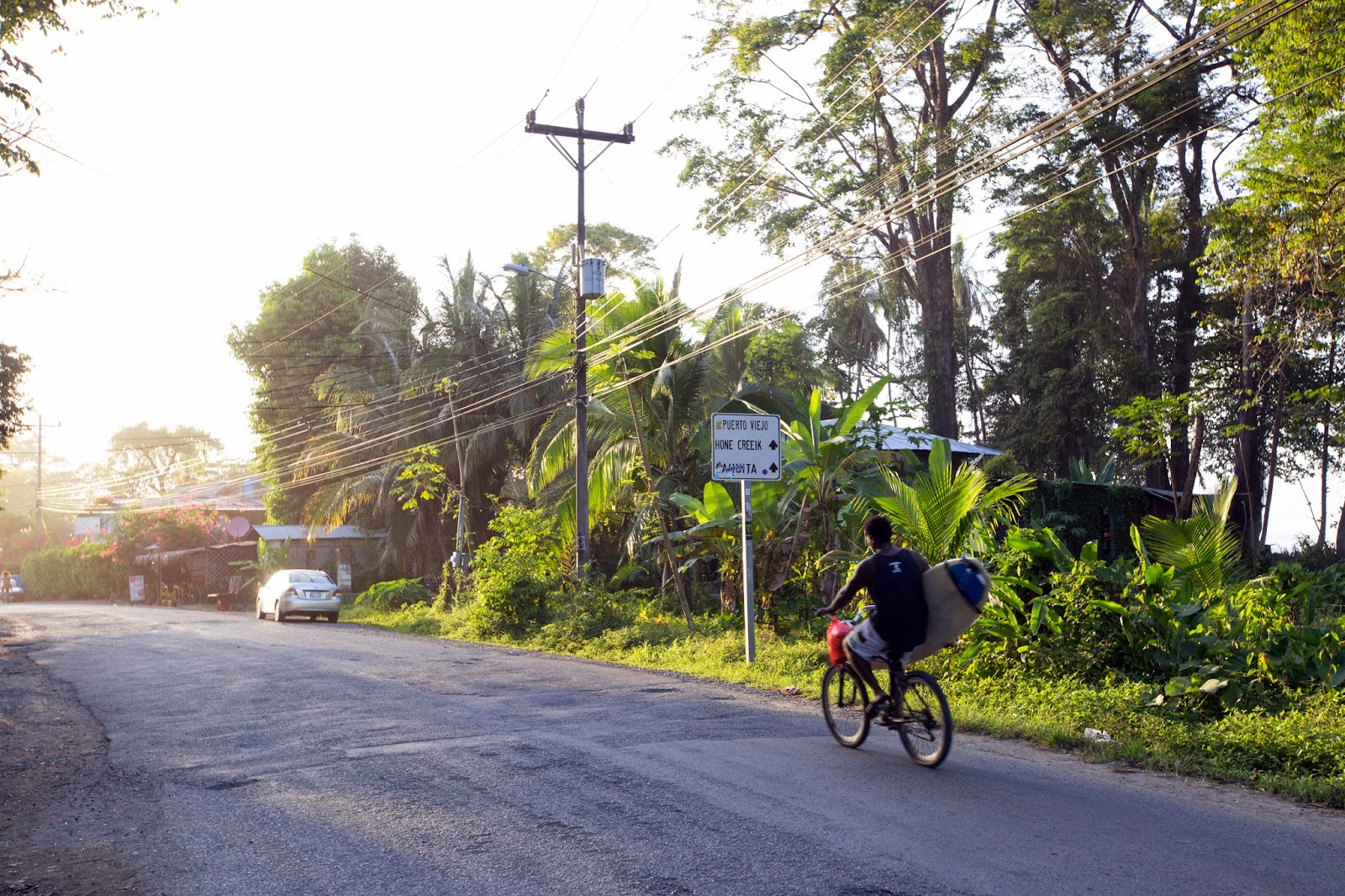 It's been several days from my over dramatically hellish voyage from San Jose to Puerto Viejo, and honestly I almost forgot the anxiety I felt then. It's hard not to be at ease here. The vibe is just unlike what I've experienced before. No one gives a fragment of a fcuk, and in the best way possible. A lazy way to describe this small town is hippie/backpacker/surfer/rasta/reggae with some Latina undertones. Just undertones, as in the language spoken here is Spanish. Everything else is that out of some sort of TV heaven. There are white dreads, black dreads and Hispanic dreads. Ankle charms and chancletas. Bikinis on bicycles. Taxis are average Joe folk with a knack for conversation. At every resort and hotel I've stayed in, I totally forgot I was a solo traveler. I don't feel lonely at all, which is bizarre as I don't know what. Jason, Oscar, Harry, Allen from L.A., some German lady, this German man with long hair, Jerald, the pregnant Irish couple from dinner, Joe? And his partner from Toronto-slash-Minnesota, Jorge. All of these characters have made me feel less and less of a stranger during my stay here. Friendly and chatty and easing me out of my shell. Sometimes I have Wi-Fi but I've found that I don't really need it. I mean, to do work yeah, but I'm not anxious and all that.

What a necessary change in pace this trip was. 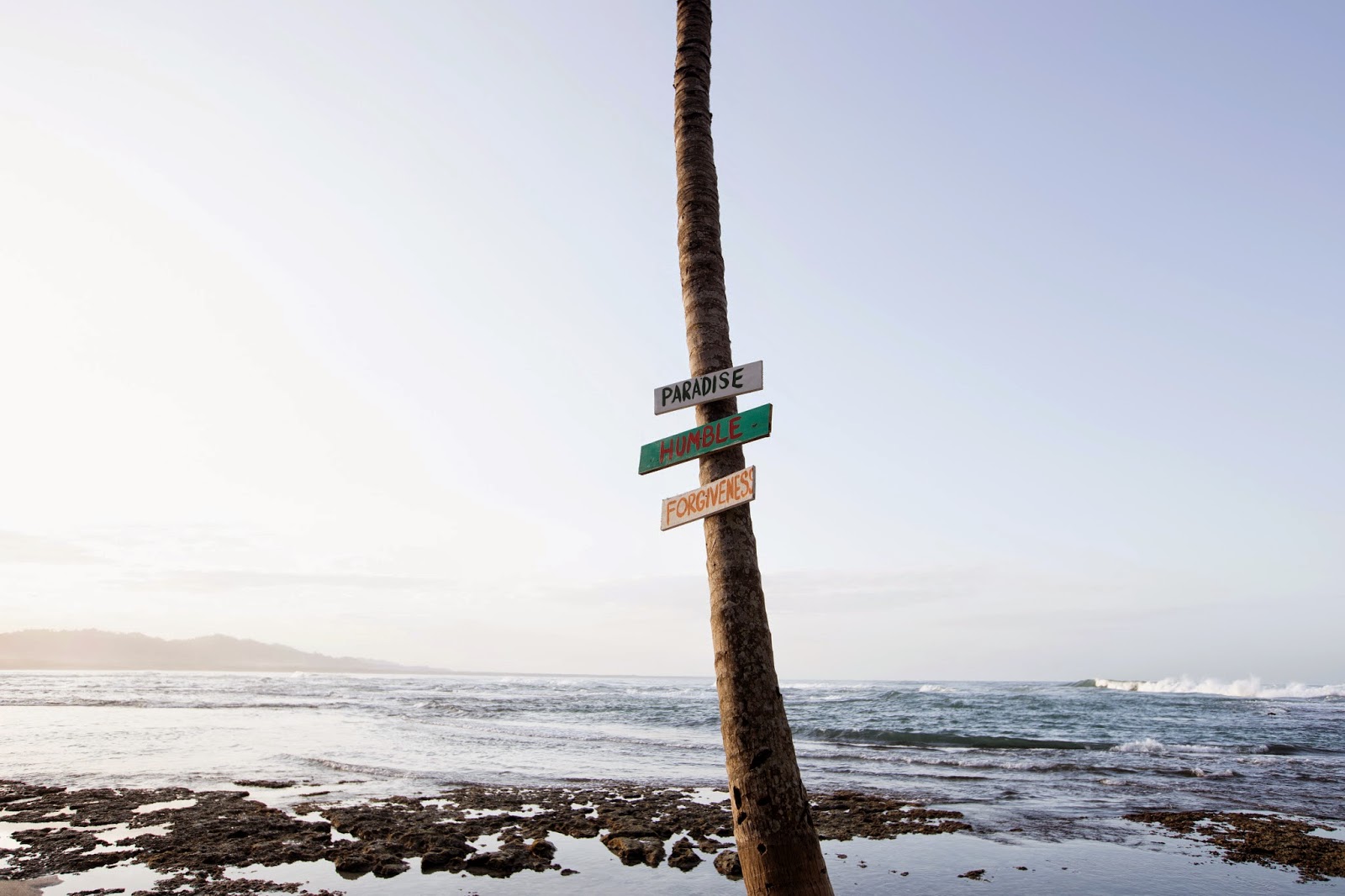