Wishing Death On A Part Of Me

I don't believe in suicide, and that makes things a little tricky. It's extreme. I don't want to kill me. But a small part of me, yes, I do. Her name is Shy, and I want her dead.

Shy -- and all the other traits she brings with her (second guessing, waiting, missing opportunities because I simply don't take them) -- is nagging and annoying. She's smothering like a pastor is to his teenage daughter, or like a significant other fishing for some Instagram-worthy PDA.

When I want to be let alone to just do my thing, here Shy comes, hovering over my shoulder like cartoon depictions of Satan. Whispering what-if's into my ear without giving the angel a chance to land on the other side of my mind and tell me go for it. You can do it. What have you got to lose? Go say hi to him. Go ask for a promotion. Start your own passion project. Ask and you shall receive. All that inner encouragement drowned out by the white noise of self-apprehension. Senseless fear and fuzziness. A barricade that I have no idea how to disassemble because Shy fixed it up good and tight, tossing out the instruction manual early on.

When I was drifting into my late teens, there was so much that I wanted to change about myself. Physical things, mostly. I hated my feet. My knees. My bow legs. My boobs. My ears. My hair. My skin (never my skin color, though). I thought I was corny. Unpopular. A nerd. An oreo. A late bloomer. Luckily I did a lot of growing since then and eventually a lot of loving. I'm very happy with how I turned out and appreciative of the quirks God gave me.

Forget The Kim K Part: The New 'Vogue' Cover Teaches Us About The Power Of Persistence

Nine times out of ten, the consumer reaction upon seeing Kanye West and Kim Kardashian cuddled in bridal wear on the cover of Vogue (aside from awww, eye rolls or sucking of teeth) was, "FINALLY!"

For a steady couple years, one of the ongoing jokes of the internet was when the stoic Anna Wintour would honor Kanye's request to put the mother of his child on the cover of American Vogue. It was the stuff of comedy because nobody expected that day to come. No one expected the revered Artistic Director of one of the biggest media companies to honor the seemingly trivial request. To "cave." But she did, and for the month of April we will be staring KimYe in the face every time we run to our local CVS for a toiletry run.

The tweets collected under the cumbersome #WorldsMostTalkedAboutCouple hashtag have echoed everything from disappointment in Ms. Wintour to utter shock to shaming the publication for pandering to social media gimmicks.


Can't decide what's more annoying, the fact that they got a cover or the #WorldsMostTalkedAboutCouple -really Vogue? pic.twitter.com/dqyLwRkMmC
— Lauren Alexis (@laurenalexisnyc) March 21, 2014

Now, whether or not Kim Kardashian deserved her cover spot is neither here nor there (she's already solidified in ink, so you will have to deal). What's really worth noting here is Kanye West and the $5 proof of the power of persistence.

MY FIRST TIME ON AMTRAK was more or less painless. I'd done some train travel from NY to Connecticut before, but nothing like this. Nothing like 30 hours across cityscapes, woods and open pastures en route from the heart of Manhattan to New Orleans, Louisiana. To most, the very idea of being train-bound for more than a couple hours is the stuff of nightmares (my friends are still questioning my sanity for doing it), but to me, it was a well-deserved dose of uninterrupted serenity. Observance. A clear mind. Engagement of all the senses. I hear the tinkering of loose gears and panels of the overhead luggage compartments. The crinkling of an aluminum snack bag giving way to a hungry set of hands. The blaring of the vessel's horns piercing the quiet of midnight and dispensing itself across the outskirts of Virginia. The stale and loaded coughs of the woman in the next row with the overly active polyphonic ringtone. Her voice is husky and weary with age. "I'm trying to get some sleep, but you guys won't let me," she groans into the phone after what feels like her 15th incoming call of the day. 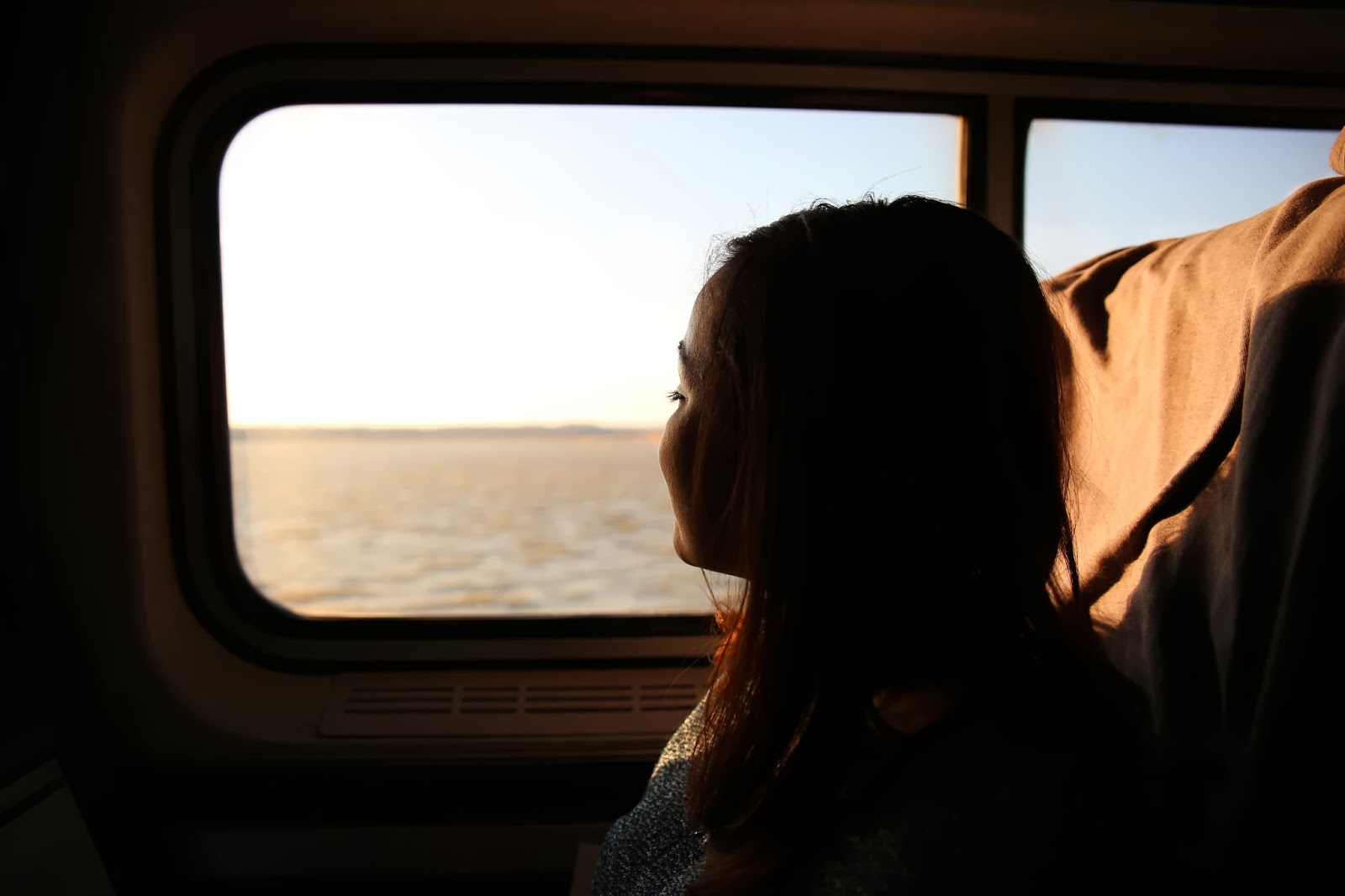 I take a bite of the second half of my cold-ish Subway sandwich and a swig of the smoothie I prepared before I left my house nearly nine hours ago. As I dine by myself (my two travel mates are asleep now), I can hear the shuffling of feet down the aisle on the way to the restroom, then back to their seats. And soon the sleepy silence of the night coupled with the scattered fluorescent white glow of entertainment devices -- phones, iPads, laptops, kindles -- trying their best to amuse the night owls and folks unable to slip into their second nap time.

I wake up early enough to see everyone else wake up. Groggy, lining up to the restroom to brush their teeth, staring out the windows idly. The woman in front of me has on blue footie pajamas and was rolling up a joint in plain sight yesterday. She and her two excited (and shoeless) comrades speak in the sort of slanted banter that makes me want to travel more. And farther. I can see a burgundy passport resting on the other woman's lap. England, I believe. Her boyfriend nearly stumbled over backwards when we passed the Lincoln Memorial riding out of D.C., eyes wide, grin wider as he took in the sight of the statues glowing in majesty. I barely looked over. I'd seen it before. D.C. was my backyard for four years and I barely cared about the monuments. But to see this foreigner get starry-eyed just to pass stiff presidents at 90 mph… I want that. I want that kind of appreciation for new sights that are old to everyone else. I want for my navy blue passport to be the oddball of the bunch. Instead, I lean back in this American train, stare at folded lawn chairs in the middle of woody American backyards and fields of American cows chowing down on grass. I recline the cushy seat as far back as it can go and stretch my legs, allowing my body to rock with the cradle-like motion of the train, letting my mind drift to non-American places as I wait for us to pull up hours later alongside the Mercedes Benz SuperDome. My time will come, but for now, this trip will do.

'Oxymoron' Proved That It's Okay To Stan For TDE

I hate Stans, I truly do. If you know me or of me, you know that I tend to retreat from all social media platforms whenever Beyonce so much as breathes publicly because the hive is in full swarm. Obsessing over people never really made any sense to me. The last person I can vividly remember feening for with posters, merch and memorized birthdays was Shad Gregory Moss, BKA Lil Bow Wow. I was 11 when "Take Ya Home" came out and 13 years later, I can still run it line for line, Harlem Shake and all. See how nuts that sounds?

Anyway, you can imagine how off kilter I felt when my appreciation for rap's quietly dominating super crew crept into super-fan territory. Today, if you ask me who my favorite artist is, I'll probably say matter-of-factly, "TDE." Yes, I'm well aware that this isn't a singular person, but the solid group as a whole contributes to a superb listening experience balled into one creative entity. Top Dawg knew what he was doing.

Kendrick Lamar -- my first entry point into the Left Coast-based crew -- and his good kid, MAAD city registered to me months later than everyone else. Blame it on my deliberate avoidance of "The Bandwagon." I'd vibed with a couple Section.80 snippets from time to time and had heard Overly Dedicated, but after giving GKMC repeated listens, it forced its way onto my daily iTunes queue. Then came my unexplainable Ab-Soul adoration. I dunno. Something about him and his wild mane, introverted, visceral nature and Piscean traits charms me. That and his 2012 project Control System, which I didn't actually listen to until the tail-end of 2013, but only because I didn't know him like that yet. Trust me, I'm thoroughly pissed that I didn't. Something in me clicked when "Book of Soul" started playing. I swear I can remember my eyes watering or some super dramatic ish like that. Yeah, it was like that. Out of sheer curiosity as to who the two non-Cali breeds rolling with a clearly Cali crew were, I listened to SZA's See.SZA.Run and S and Isaiah Rashad's new Cilvia Demo. Loved 'em all, surprisingly. Jay Rock's menacing flow has always intrigued me (I can't help but snarl when I spit his feature verses) and I look forward to when his next project surfaces.

And then there's ScHoolboy Q, the dopey-energetic hybrid of the crew, and his brilliant new LP, Oxymoron. I knew of Q before I really understood Kendrick. "There He Go" hooked me in immediately without knowing who a damn ScHoolboy and his capital H was. Then I got hip to Black Hippy and Groovy Q's role in the concept troupe. I knew his next work was going to be good. Oxymoron solidified that my closeted Standom for TDE is real and merited. 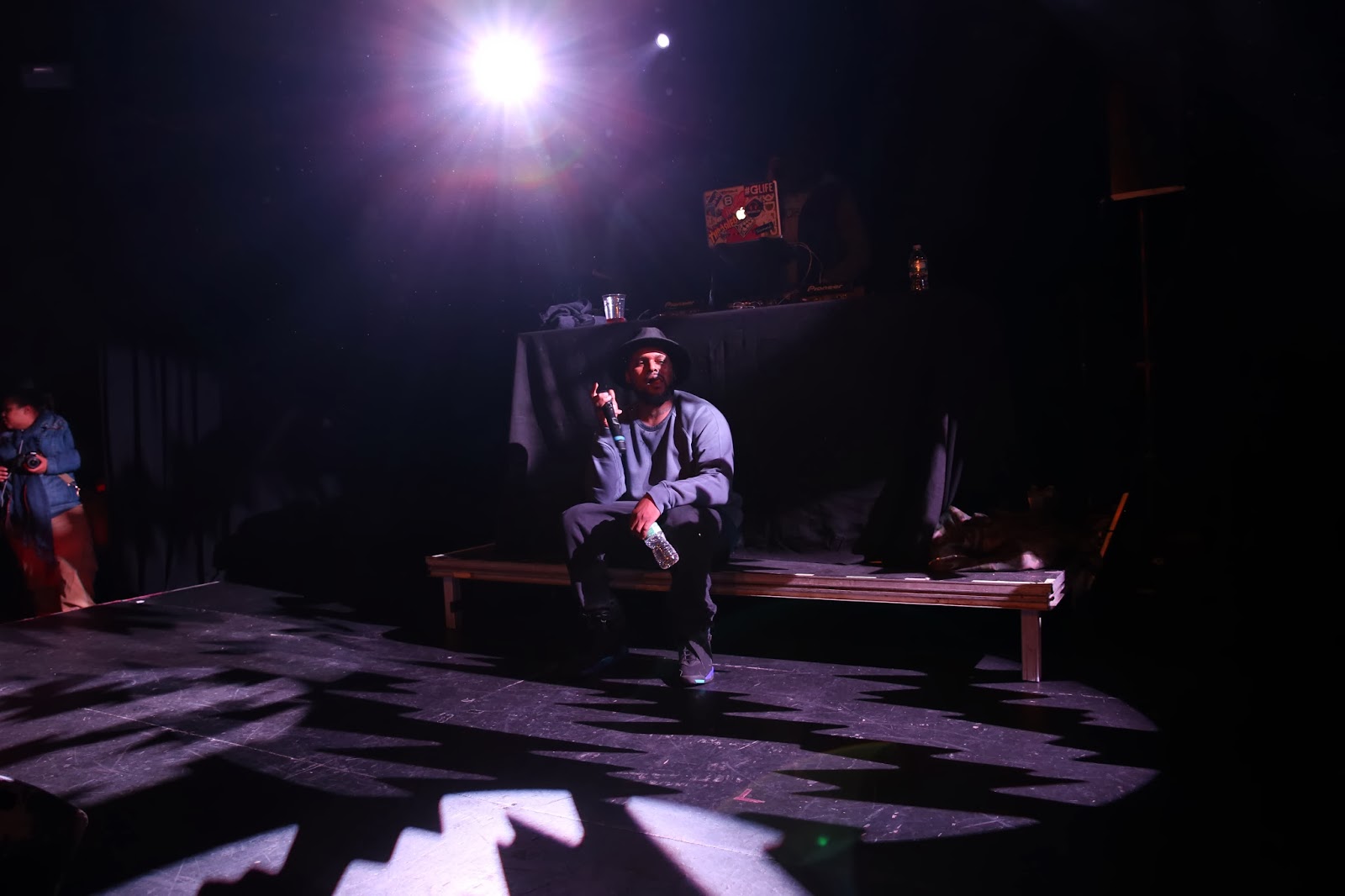