Basking In Blackness In Bahia With Travel Noire

After the first flight and first layover, I was less anxious and annoyed than I had planned to be. In fact, I was smiling. Subtly, of course. I expected to feel alone, lost, vulnerable, but sitting on that plane from Panama City to Sao Paulo, I was everything but. New York spoiled me, yes, but whether I thought it did or not, it prepared me to look at myself as a global citizen. Sitting on the train and walking down crowded city streets in different boroughs, it’s uncommon to only hear one tongue spoken in passing. There will be conversations that you technically can’t understand or jump into, but you feel it.

Foreign sentences don’t feel foreign, so sitting in this aisle seat hearing a black man speak in Portuguese—a language my ear was never trained for—to a white Brazilian after being told “Gracias” by an ethnically ambiguous fellow while in Panama’s airport felt like magic. I don’t feel lost even though I don’t fully know what they’re saying; I feel enamored. Inspired. Just because I’m a part of this right now by osmosis. Part of cultured roots and lilty tongues. To witness that gradual transition from gate to gangway was unlike what I’d imagined it to be; it was better. 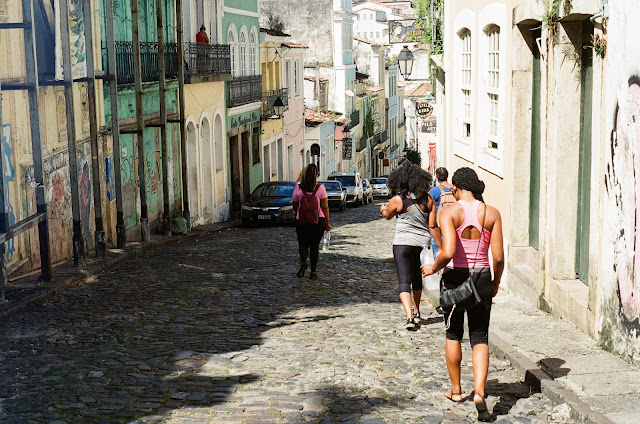 I’d never heard of a “Brazilian winter” before. When you think of winter, you think of New York at its most unforgiving. Or Canada. Crisp white lawns and slushy brown streets. The hurt of numb, red fingertips and constant reminders that the socks you bought aren’t quite thick enough. Scarves, fuzzy hats, mittens with removable thumbs for struggle texting. Frosted breath and hot cocoa and fire escapes and days off school and work. Not Brazil. Not Salvador da Bahia with its roosters that crow at six in the morning and two thirty in the afternoon without ceasing. With its sudden, heavy rains that wane out into scattering, cool mist twenty minutes after starting. With its hot, hot suns and the relieving shade from wide green palms and extending branches. From the infinite stream of flip-flops slapping and pitter-pattering across uneven, uphill cobblestone. With its moquecas and caipirinhas eaten and sipped plentifully on the airy edges of patios, blending with the tune of American laughter and smoky Portuguese lilts in the kitchen. With its clumped up houses with clothes lines extending out of open doorways, gridiron windows and snaking roads out front. This is not a wintertime I could’ve imagined (nor is it one I wish to leave), yet here I sit on my private balcony passing over sweet memories made as the time passes before my capoeira class.

These past three days have felt like plenty more, and the friends I’ve made within them have felt like long lost family. That’s black people for you. That’s the main reason I was so adamant about test driving a Travel Noire Experiences trip for myself. There’s something so magical about the binding feeling that comes with color. Good ol’ melanin. Browns, beiges, butters and blacks. Even straight out of the gate at the airport they found me, lost-looking and confused and tired and delirious looking for a TN’s taxi driver holding a teeny, tiny sign. I scanned the airport rich with a language I simply couldn’t navigate at the moment and came across a cluster of black people with my eyes. I had a feeling they were my group but I kept to myself to avoid mislabeling and embarrassment on my part. They spotted me spotting them, and with disarming smiles and a crooked finger, beckoned me over to them, confirming my correct association. From there, all discomforts were gone.