In 2017, I sat in the pews of three churches or the rows of fancy reception halls watching two people in love become one union. And for the weddings I didn’t attend, I saw enough of the ceremony on social media to make me feel like I was there, dodging the thrown bouquet per usual. I always wonder if their special day came close to (or exceeded) what they drummed up in their dreams prior to.

Culturally, we joke and say that from youth, us women, prayerful brides-to-be, spend years planning for their weddings, regardless of if the husband part of the equation has been factored in yet. We know the style and cut of engagement rings, possible surprise engagement scenarios, the type of dress and hair, locations and venues, months, seasons, guest lists, table decor, honeymoons, you name it. And it’s a fun and wonderful thing to imagine. I love to chime in to the building of this fantasy as, through age, we inch towards their realities.

All my life I’ve wanted to become a best friend turned wife, a mother, a life partner, someone else’s complete family. However, I’ve avoided letting even a fragment of a wedding ceremony for myself materialize in my mind. In casual conversation, I’ve crossed out the option of me wearing a strapless dress simply because my breasts are big and gravity is real, and that I couldn’t have a spring wedding because my allergies are horrendous, but my thoughts haven’t drifted much beyond that. I have no mental picture of myself in a white gown, no clue what my hair would be doing, no color schemes, no clue of the reception activities or if I’ll do customized vows or who would be doe-eyed in the audience dabbing away tears for me.

I don’t necessarily see myself as superstitious, but I do have a gut fear of karma and jinxing things. While I do believe in The Secret and that thoughts become things, I fear that if I conjure up something prematurely, I’ll put bad luck in the air and ruin whatever’s meant to be. But the older I get, the more world I see, and the more life I experience, I wonder if the snapshot of a married me is MIA not because I’m scared I’ll jinx it, but because it doesn’t actually exist. Maybe that aversion to envisioning my big day is a subconscious way of not getting my hopes up too high to be crushed. That maybe I don’t see myself as a bride because there’s a very real chance I’ll never be one.

Learning How Breathe: Turning 27 in Cuba

This is not a typical trip review with do's and don'ts, but a inward reflection and the sights and sounds of my trip. Glimpses of recommended places to go are bolded throughout.

I haven't sat in a rocking chair in years. Or not in recent memory, at least. The thought of rocking chairs is paired with ages high in numbers, the bodies of whom are rich in wisdom and memoirs hidden behind tired, wrinkled eyes. Vaudeville films flashing of a life wholly lived. That, and inner peace. Tranquility. Satisfaction with the way things are and a sound peace of mind. The swaying forward and backward moving to the natural metronome of the heartbeat. Back, forth, back, forth. The rhythm is just so. No missteps until it is time to get up.

My time in Cuba has treated me well, offering me that stillness I couldn't achieve prior. That content and ease. Betty [of Chez Betty] and Abuela ("Alla," as Betty would call down the hallway at any given time) and mama have opened their place of solace and refuge to Crystal and I—and Alla's rocking chair—and allowed me to taste the tastes and smell the smells of Havana life without all the fluff. In my head, I could get around alone if I wanted to. Find a way to may my way through town with 10 CUP instead of the 10 CUC reserved for tourists, more than 50 times the price. Flexing the Spanish I thought was terrible but turned out to be not too shabby all along. 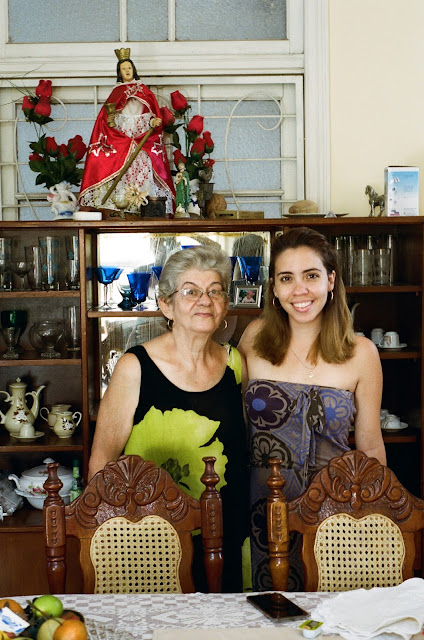 It all started last Tuesday, Saint Valentin's, the day for love I used to love myself enough to treat myself to a birthday trip. Coasting along an island highway in a kiwi candy green 1953 Dodge Kingsway, watching the school children on midday break saunter down roadsides in their mustard skirts and high white socks to match their starched shirts. Or mischievously toss crumpled paper at passing cabs out the side of packed bus windows. Hand after hand of every sort outstretched, flagging down shared cabbies that are no more than 1 CUC a head. There can't be enough cars for all those hands. Adele's "Fire to the Rain" and Whitney Houston's "I Have Nothing" play on the radio in fusion with local tunes as we quietly choke on the exhaust fumes of Cuba's infamous old cars and work trucks beating us on the road. Our taxi driver, Ivan, was everything I had envisioned a Cuban man to be. Classically built, with a lean figure, strong but chivalrous face, salt and pepper hair and never without dress pants or a dress shirt tucked in and dress shoes. Unlike Betty, who accompanied him to pick us up at the airport, the English in his vocabulary was sparse, but his warmth and attentive demeanor spoke clearly enough. 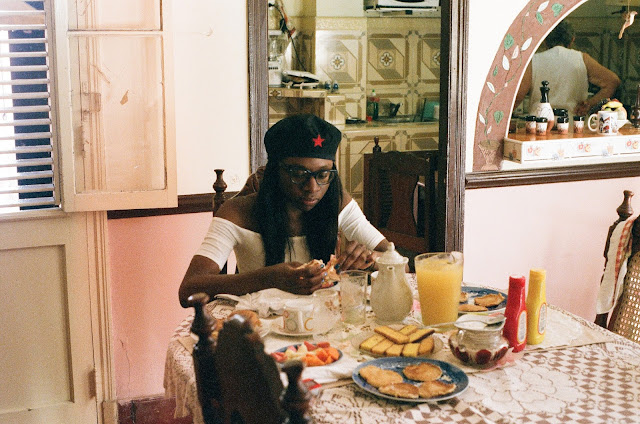 It was Ivan who, the very next day—after we filled out bellies with Alla's tomato egg scramble, arepas, fresh tropical fruit, juice, strong coffee and Cuban ham and cheese sandwiches for breakfast—would be the one entrusted in taking us two hours away to the beaches of Varadero. During our adventure, we passed by the U.S. Embassy (which reopened in 2015 after shuttering in 1961), Hotel Nacional de Cuba (an option we didn't even consider) and fishermen hoisting their lines off the side of El Malecón, Havana's Union Square-esque hang out spot, at 9 a.m. We passed beautifully crumbling buildings with Fidel Castro posters stuck and woven between the window bars. We took stabs at conversation as we went, alternating between Ivan's fragmented English, our broken, tense-deficient Spanish and the Google Translate app I downloaded for the trip. Ivan, being the gentleman that he was, made sure he got water for us at the rest stops with his own money, even though he gave us a discount day rate for the trip (we paid it forward and back in our tip, though).
Read more »
Posted by Stassi X. at 12:05 PM No comments: